Hitting a target at a range outside of your comfort zone can be a huge challenge for a shooter, especially when the pressure is on. The Axeon® Second Zero® patent pending, wedge prism technology allows you to shoot outside of your Maximum Pointblank Range to help eliminate "hold over" from your shooting solution. With the Second Zero, you are able to extend your MPR with most high-velocity rounds an additional 70-100 yards with our 4.3 MOA/330 yard prism. Want to shoot longer? Our 11.5 MOA/530 yard Second Zero uses prisms to correct most high velocity rounds to hit a target within a range plus or minus 40 yards from the new true second zero. With a Second Zero® made for a prescribed second distance, you don't have to calculate or adjust for hold over. It's fast, simple, and easy to use. Just flip it in place and shoot.

The Second Zero is not limited for use to high-velocity calibers. Rimfires, Pistol Caliber Carbines, and other slow moving cartridges can find new life and new range with the Second Zero. The common .22LR bullet drops over 12" at 150 yards when zeroed at a 25/75 yard zero. Engaging the 11.5 MOA Second Zero here can allow you to ring the steel from 150 - 180 yards with ease. With the Second Zero you can push your limits and your rifle's limit and learn along the way.

GET A SECOND ZERO® TODAY 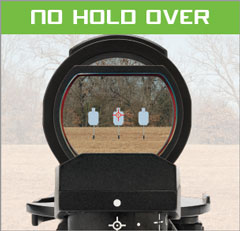 The Second Zero isn’t limited by application. This prism device can be mounted on a section of Picatinny rail for rifles so equipped or it can be fixed to the bell of most scopes. Additionally the Second Zero is never in the way. When not in use simply disengage the device by flipping the prism up for the bell mounted units and down for the rail mounted unit. This choice in mounting style and the instant engage the Second Zero offers makes it the natural choice for shooters looking to broaden their shooting horizons.

WHAT IS THE SECOND ZERO® BULLET DROP COMPENSATION SYSTEM

The Axeon® Second Zero® is a precision optical device that gives any rifle shooter an instant additional zero distance whether in a hunting or tactical application. It's an aiming device used in conjunction with your shooting optics and works with all optical sights from rifle scopes to dot sights. The patented Second Zero®, is a prism driven optical device configured to bend light at a precise minute of angle to achieve a "second zero" downrange. It will revolutionize the way you achieve accuracy at long distances. The device simply mounts forward of a traditional scope, red dot, ACOG, or other optic. Your optics function normally when the Second Zero® is not being used. When engaged, the prisms of the Second Zero®, which can be selected based on a hunters specific ammunition load, shifts the image to compensate for bullet drop. Simply place the crosshairs on the target just as you would at 100 yards. You leave your optic sighted in at 100 yards and your Second Zero® provides you an additional distance depending on the load you shoot out of your rifle.

INNOVATION BROUGHT TO YOU BY A GREAT PARTNERSHIP

The Axeon Second Zero prism system preceded the NightForce Wedge as a result of John Baker’s passion for innovation and the pursuit for perfection. John Baker of TacomHQ is equipped with an optical engineering degree and over thirty (30) years manufacturing experience as project and technical director with ISO-TS accountabilities. One of John's most popular products is the TARAC (Target Acquisition), which is the predecessor to the Axeon Optics Second Zero which uses John's patent pending prism system. His company creates the high-speed-low-drag gear military, spec-ops, and extreme long range shooting shooters demand. TACOM HQ makes the Alpha TARACs in several MOA configurations including applications made to customer’s specs. His Charlie TARAC is the adjustable ELR shooting aid of choice that allows long range shooters to dial in a precise correction without needing extreme corrective scope bases or an unusual stock cheek piece. The Charlie TARAC and John’s other shooting products are being used to set world records for distance shooting and taking precision rifles to the next level.

Our partnership with TACOM HQ brings John’s cutting edge technology to every shooter’s rifle. Think it’s a gimmick? Think again. Order a Second Zero and head to the range and see for yourself. 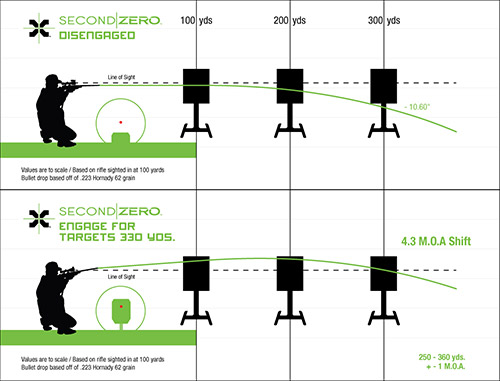 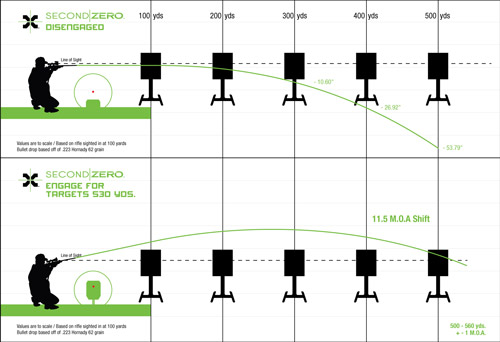 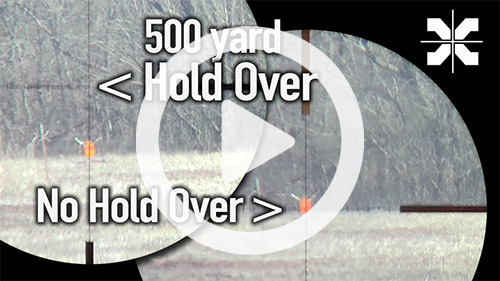 HOW TO DETERMINE WHICH AXEON® SECOND ZERO® YOU NEED.

Which distance will you be shooting at?

Want to get specific or precise?

That is entirely possible. Here are two charts that show the expected drop at distance for select rounds. Use it to determine at which distance your bullet will strike a target using your new Axeon® Second Zero®.

Read this blog post about the Second Zero® for more information that may assist you.

CUSTOM UNITS AVAILABLE: If you wish to shoot at a specific distance, perhaps a 1 mile shot, contact our custome shop at TACOMHQ. They will get in touch with you for the specifics. If you're looking for a military grade Second Zero®, go to TACOMHQ.com under "Products" and read about the Alpha and Bravo units.