A Sighting In Cautionary Tale!

Ready for a shooting horror story? No, no one gets hurt, other than one shooter’s pride. The story begins with a brand new, chassis rifle and a premium scope. For the record, there was nothing wrong with either the rifle or the scope. The rifle was chambered in the amazingly popular 6.5mm Creedmoor round and the scope had been mounted with high-quality rings. About a dozen friends and family were there to witness the shooter fire the rifle’s first shots one cold January afternoon. Everyone was expecting awesome things. 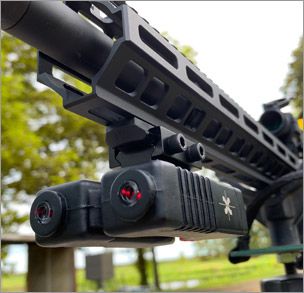 Was it hubris that made the shooter place the sight-in target at 100 yards? Maybe, maybe not. Nevertheless, that is where we started out witnessing this event. Due to the ground being nice and wet and the area directly behind the target being leafless brush, any misses to the target could not be seen. And that is exactly where things went really wrong. All eyes trained on the target area looking for a hint of impact. After 5-6 shots someone thought they caught view of an impact and advised the shooter accordingly. Adjustments were made. Verification shots followed. Once again, “I got nothing” and “Where is it hitting?” for another 5-6 shots.

Finally someone called a hit and more adjustments were made. And then we were right back to where we started. Someone advised moving the target closer to us. “How about 75 yards? Surely we’ll be on paper at 75.” Wrong. Once again after a few more shots it was evident that no one had a clue where the shots were landing. One box of shells were gone. One guy took off on the hour round trip journey to the gun shop to buy more ammo before they closed.

“50 yards?” By this time the shooter was becoming aggravated and embarrassed. We went down to move the target to 50 yards. Range hot. Now since the scopes dials were who knows where and the target was in a different location than where we started, it was still a mystery if the next round would impact the 12”X12” paper target. The mystery was solved when the first round from box two was fired. Were we going to need box three? It was starting to look that way. We were finding out that the bail of straw that the target was appended to was not a good impact indicator either. After a couple more shots the shooter had his bearings again and more adjustments were made. Finally he was on paper. With a few more shots he was zeroed in at 50 yards. We moved the target back down to 100 yards and by the end of box two the rifle was finally zeroed in at 100 yards. Zeroed in with a hot barrel. Zeroed in with two boxes of ammo that cost $1.40 each time he pulled the trigger. $56 dollars’ worth of ammo to get zeroed in.

If there was only some way to not waste a whole box of ammo (or two), some way to get zeroed in with only one shot.

Absolute Zero: The Best Way to Sight In a Rifle

Sadly, as I was a witness to this event, I had the solution… at home. I took for granted that everyone’s rifles would be sighted in for our annual camp-out and range-fest, so I left my Absolute Zero at home.

With the Absolute Zero you get one device that can help you sight in all your rifles, and any that you will buy in the future. But how does it work?

Your rifle barrel and scope are kinda almost parallel. If you have a verifiable way to know that you are holding the rifle exactly the same way while you are moving the elevation and windage knobs on your scope, you can zero the rifle in with just one shot. The Absolute Zero does just this by allowing you to hold the beams of its lasers in the same spot on your target. This method is call the Hancosky method, a patented process for zeroing in a rifle.

The Absolute Zero kit comes with several adhesive reflective strips that have graduated boxes printed on them. These boxes are the anchor points for the lasers’ beams. The boxes are numbered so you can make note of exactly where you are placing the lasers so there’s no chance you will adjust to a second set of boxes. With the unit on and lined up on the target, gently squeeze off a shot. Once things have settled down, realign the lasers into the same boxes and the same position within each box (I usually try to get in either the upper left of right corner of the box, just to be as finely tuned as possible), and make adjustments to the windage and elevation so that the crosshairs line up on top of the bullet’s impact.

Using this process establishes a 25 yards zero. If you are shooting an air rifle, crossbow or modern sporting rifle, this may be fine for you. Most hunters use either a 100 yard or 200 yard zero on their hunting rifle. To make these corrections, you will need to adjust your elevator knob the required number of clicks for that zero distance.

Using a hypothetical bolt action rifle chambered in .308 Winchester with a scope height of 1.5 inches we can see that the bullet impact will be about 2.6 inches high at 100 yards and about 1.3 inches high at 200 yards. Our hypothetical scope adjusts in ¼ moa clicks, therefore, adjusting for a 100 yard zero would mean lowering the elevation by 9 clicks. Lowering the elevation by two clicks would make the rifle just about dead on at 200 yards.

Likewise a modern sporting rifle with a 2.5 inch scope height will be effected the same way but to a greater extent due to the much greater scope height. Zeroed at 25 yards, a typical .223 round will be about 5.8 inches high at 100 yards. It will take 22 (1/4MOA) clicks for this rifle to be zeroed at 100 yards. For a 200 yard zero, you will need 17 clicks to correct from the 25 yard zero.

But who goes to the range to fire one shot? No one. Set up a target at 100 yards and test your zero out. You may need to make a slight adjustment based on what you see at 100 yards when compared to 25 yards, but the bulk of the work will have been done for you at 25 yards. Once you are happy with the rifle’s performance, continue to enjoy hitting your mark to your heart’s content.

Having a streamlined process is one thing, having a streamlined product is another. Taking this into account, we’ve redesigned the mounting system for the Absolute Zero to make set-up and take down an absolute breeze. The scope ring mount now makes use of a quick release system that is both easy and quick to install. Orient the device to the positon that you want, torque down the mount and place your target strip to match the laser’s orientation. All that is left to do is get zeroed in.

As stated earlier, you can use this on just about any platform that uses a 1” or 30mm riflescope or has a section of picatinny rail. A handy tool to use before heading out to the range is the ballistic trajectory calculator found at www.shooterscalculator.com. Research the load you shoot so you know the ballistic coefficient, bullet weight, velocity, and your scope mounting height before you start inputting data into the calculator. Good data in gets good results out. Don’t just trust the velocity figure printed on the ammo box, especially if you are shooting a shorter barreled rifle. If you don’t have access to a chronograph you may need to research your ammo’s performance from similar rifles.

If only I had brought my Absolute Zero to the range that cold day, much frustration could have been saved and we all would have had the chance to shoot that slick rifle. Next year it will be with me, just in case someone else shows up with a new scope or a rifle that needs zeroed in. In the meantime, I have a new rifle that needs zeroed in, so I’ll be heading to the range with my Absolute Zero to get this taken care of without wasting ammo or my time.